Not Another Face in the Crowd 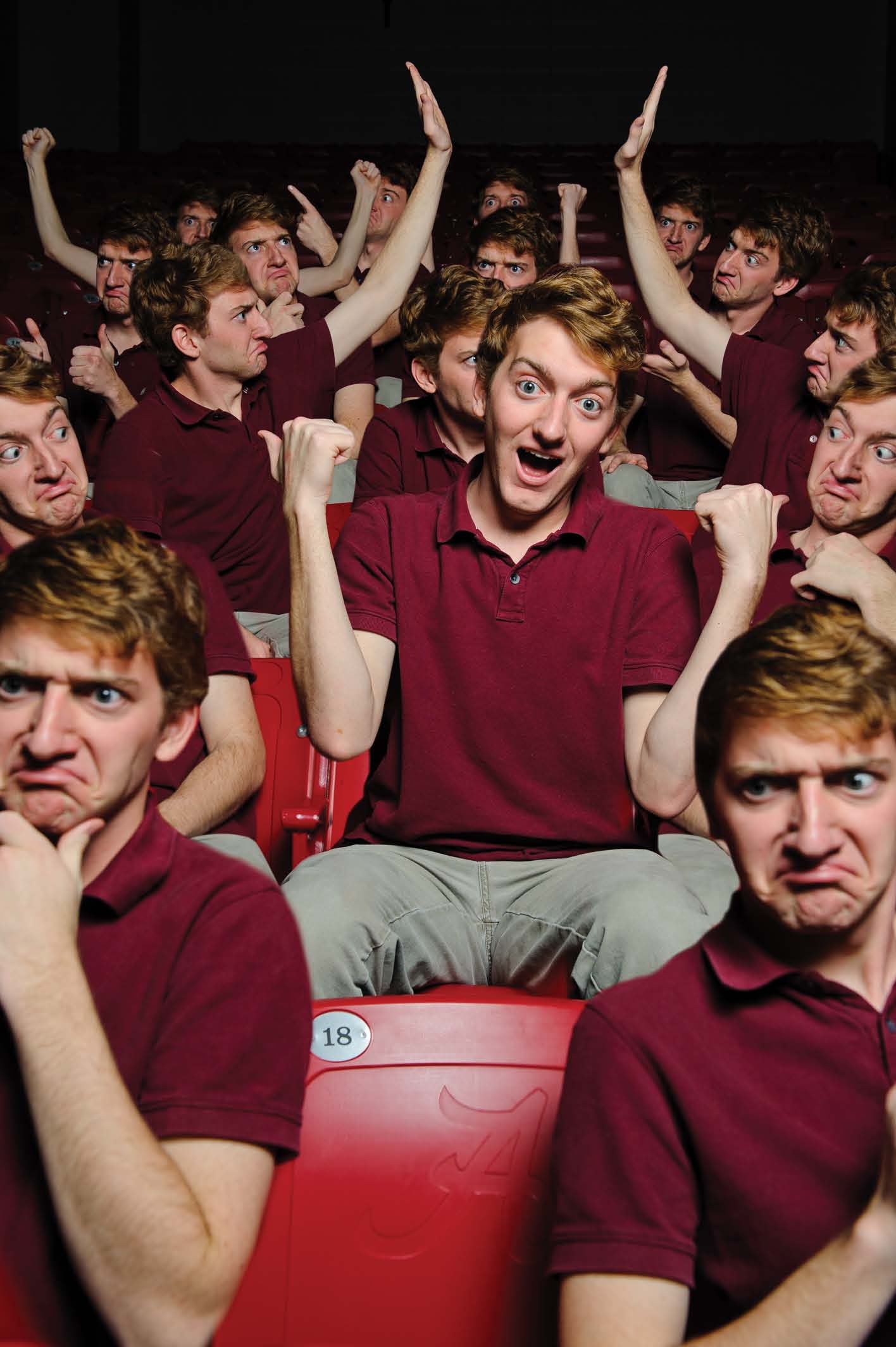 It could have easily been his first interview, judging by the way Jackson Blankenship fiddled so nervously in his chair, self-consciously contemplating his answer to each question.

But this was not Blankenship’s first interview, and, if you asked him which it was, he wouldn’t be able to tell you. Interviews are a fragment of his life after becoming one of the most published faces at The University of Alabama. He recalls vague memories of a once ordinary life – about a year ago, when he was an unknown freshman civil engineering student.

“I don’t want to say I was a typical student at The University of Alabama because I definitely wasn’t,” Blankenship said. “I lived at Bryant (Hall) and I roomed with three of my good friends from high school. We’d all just go to class and play video games all the time, as stereotypical as that sounds.”

An avid Alabama basketball fan, Blankenship spent many nights in the student section during games. He began to notice fans holding massive prints of basketball players and celebrities to distract the opposing team. This gave him an idea.

“In the seventh grade a friend and I started this facial expression, and it kind of grew between us and a couple of our friends,” Blankenship said. “So I thought it’d just be kind of funny if I printed out a picture of my own face (doing the expression) and brought it to the game.”

Blankenship contacted a friend who owned a printer in Northport and was able to negotiate a deal.

“I remember talking to my mom and asking her, ‘Can I borrow your credit card to, you know, purchase this giant picture of myself ?’” Blankenship said. “I remember my dad said, ‘If he wants to ruin his life he can.’”

“The face,” which he named Charles, became a reality along with an ensuing frenzy of media attention. Not long after his face became a viral Internet sensation, he began receiving calls to make television appearances on shows such as “Late Night with Jimmy Fallon” and the “Today” show. He’s also been featured in Reader’s Digest, Bleacher Report, Yahoo News, Redditt and ESPN ’s blog.

“There was a span of like two or three weeks where I would just be interviewed every day and, like, four or five of them I had no idea who they were, they’d just say, ‘We’re with the university,’ and I’d just say, ‘Oh, okay’ — I hope you were. I hope you weren’t like evil villains or anything.”

“I remember talking to my mom and asking her, ‘Can I borrow your credit card to, you know, purchase this giant picture of myself?’”

Now that he’s had time to settle into his fame, Blankenship is venturing into new endeavors. He’s done stand-up comedy, joined Alpha Tau Omega fraternity and was chosen to serve on the board of Crimson Chaos, the official student group of Alabama Crimson Tide Athletics.

After completing an internship with WVUA 90.7, he convinced the manager to give him a show. He and his roommate, Brian Hoff, now host a radio program where they discuss movie soundtracks, music and cinema.

“It’s pretty cool because it’s one of the things I had to get on my own without the face being a part of it,” Blankenship said.

Not that the face no longer comes in handy. “Charles has a special place in my heart — in both my heart and my apartment,” he said.

“That’s the one I’ll probably bring with me to the games,” he said of Charles Four. “Unless I run into Angelina Jolie at the Alabama football game, then I’ll get her to sign that.”

In the meantime, Blankenship is busy contemplating ways of incorporating his newfound media savvies into his future as an engineer. He plans to switch his major to mechanical engineering and possibly pursue a minor in telecommunication and film.

“In an ideal world I’d build cool robots and machines, and I would also moonlight as a late-night talk-show host,” he said.