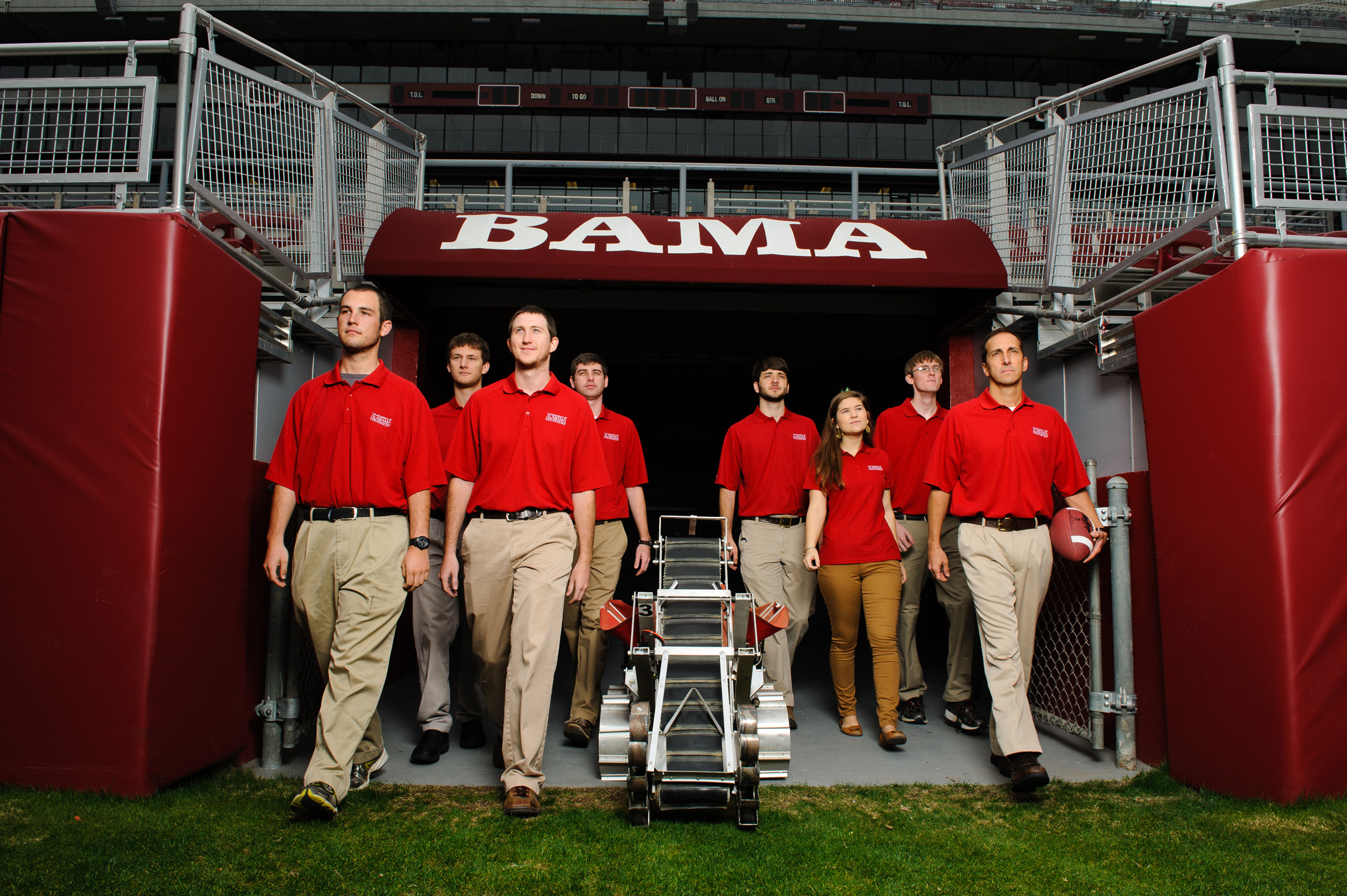 They won’t be marching into a stadium on May 20, but Alabama Lunabotics will be returning to Kennedy Space Center with the same goal as many other University of Alabama students: defending their title as champions.

Last year the team of UA and Shelton State Community College students won the NASA Lunabotics Mining Competition for developing a robot capable of navigating through and excavating 10 kilograms of lunar soil.

“UA has consistently been recognized as an innovator,” said Dr. Kenneth Ricks, associate professor of electrical and computer engineering and team adviser. “We hope to continue that trend for the 2013 competition.”

They began preparing for the 2012 competition in June 2011 by designing CAD models and obtaining the funding for the project. Creating the lunabot required members to sacrifice most of their time, including winter and spring breaks. When they couldn’t meet, they worked separately and communicated through email and video chats.

“The professionalism of our team members combined with diverse disciplines made our group resemble a business more than a college team.”

“The professionalism of our team members combined with diverse disciplines made our group resemble a business more than a college team,” said Adam Melton, team lead in 2011–12. “When the team   continued to assist other teams during the competition – even teams that posed a threat to our success — it made me very proud to be a part of Alabama Lunabotics.”

Though largely student governed, Alabama Lunabotics is sponsored by Ricks. The team has participated in the NASA competition under his leadership since 2010. He said the key to their victory rested in an appropriate balance of mass and performance.

“UA was able to excavate very well while still being one of the lightest robots in the competition,” Ricks said. “This led to a very high score in the mining category of the competition. The other factor was that the UA team worked very hard to do well in all categories, while there were some teams that did well at only one category. So, this UA team was very balanced and well-rounded.” 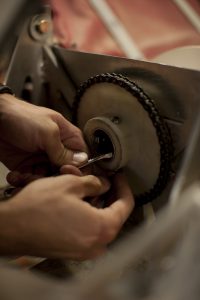 Once again, the team has spent the year preparing for the NASA competition, where it will now be judged based on an oral presentation, a written systems-engineering paper, project outreach in promoting STE M disciplines, team spirit and the mining category. Within the mining category, the robot will be judged on its overall weight, the amount of lunar-like soil collected within 10 minutes and the bandwidth required in communicating with the lunabot.

To retain their honor, they plan to earn bonus points by making the robot autonomous — presenting a robot at the competition capable of navigating across the lunar soil, excavating at least 10 kilograms and moving back across the soil to deposit its collection into a bucket without the assistance of an operator.

This is no easy task considering only three lunabots in the 2012 competition had any autonomy at all. Initiating full autonomy requires the team to create a computer for the lunabot. They have written software algorithms and included motion sensors, laser scanners and cameras on board the lunabot.

“Autonomous operation is very difficult and will add significant complexity to the robot,” Ricks said. “Success is based upon proper preparation. The team must prepare for all aspects of the competition and have a plan to address any problems that may arise.”

And prepare they have. The team is divided into groups based on the subsystems that comprise the robot. The groups meet weekly. These include the software group that focuses on the autonomy of the lunabot, the base group that’s in charge of mobility and the module group responsible for excavation.

“They had to create initial designs, model and simulate these designs, make modifications based upon simulation feedback, order parts, fabricate the robot, test the robot under competition conditions, learn to operate the robot, write all the software, design all necessary electronics and integrate all parts together to make a completely functional robot system,” Ricks said

The team has two potential lunabots to use for the competition. The first is called the front-end loader and is significantly lighter. Working like a farm tractor, its front-end shovel, decorated with the Sharpie-written words “Roll Tide,” is powered into the lunar soil by two actuators that lift and tilt its bucket.

The second lunabot, called the bucket-wheel excavator, is much heavier, a drawback for this year’s competition, but is capable of collecting 100-130 kilograms of soil at once, while the front-end loader can only collect about 16 kilograms. This lunabot is equipped with small buckets assimilated into two large wheels. Soil collects into those buckets and is dropped onto a conveyor belt and deposited into an onboard container.

“Our advantages last year were that we were light, reliable and robust,” said Justin Headley, lead systems engineer for the team. “That’s what’s going to give us an advantage this year because we are building off the same system.”

After completing modifications, the team first tested the functionality of their chosen lunabot in what the students call the sandbox. Few earthly substances are comparable to lunar soil since its top layer is six inches of dry, powdery material, like fresh cake mix, and the layer beneath compacts tightly like concrete. NASA uses a close simulant not commercially available, so the team was responsible for finding its own substitute to use for rehearsal.

Their sandbox is filled with dry sand and cement, a material Ricks said is their closest substitute for NASA’s simulant. Next, they tested the lunabot in a volleyball pit on campus. Though the texture of beach sand is not at all like lunar soil, the volleyball pit allows the team to mimic the NASA competition, a 10-minute interval in which the lunabot moves across a 24-feet-long, 12-feet-wide simulated lunar surface.

“Our testing is designed to mimic competition situations, including the obstacles, mining, collection and deposition of the dirt in the bin,” Ricks said. “It is very important for this testing to include practice for the operators. Operator error and inefficiency can lead to lots of problems in the competition. So, it is important that operators get adequate time driving and operating the robot. For each competition run the operators need to carry out a carefully designed plan. So, practice is very important. As an analogy, a slightly slower car with a highly skilled driver can almost always outperform a faster car with a poor driver.”

Though Ricks is behind his team every step of the way, he merely serves as a coach, providing technical insight for his students as they design, construct and test their lunabot.

“Goals for 2013 are the same as they are every year: to put our best effort into the project so that UA students learn engineering skills, teamwork and what it takes to be successful,” Ricks said. “When UA arrives at the competition, we want our reputation to be one of continued success year after year. While maintaining that competitive edge, team members will represent UA in a first-class manner in all their activities.”