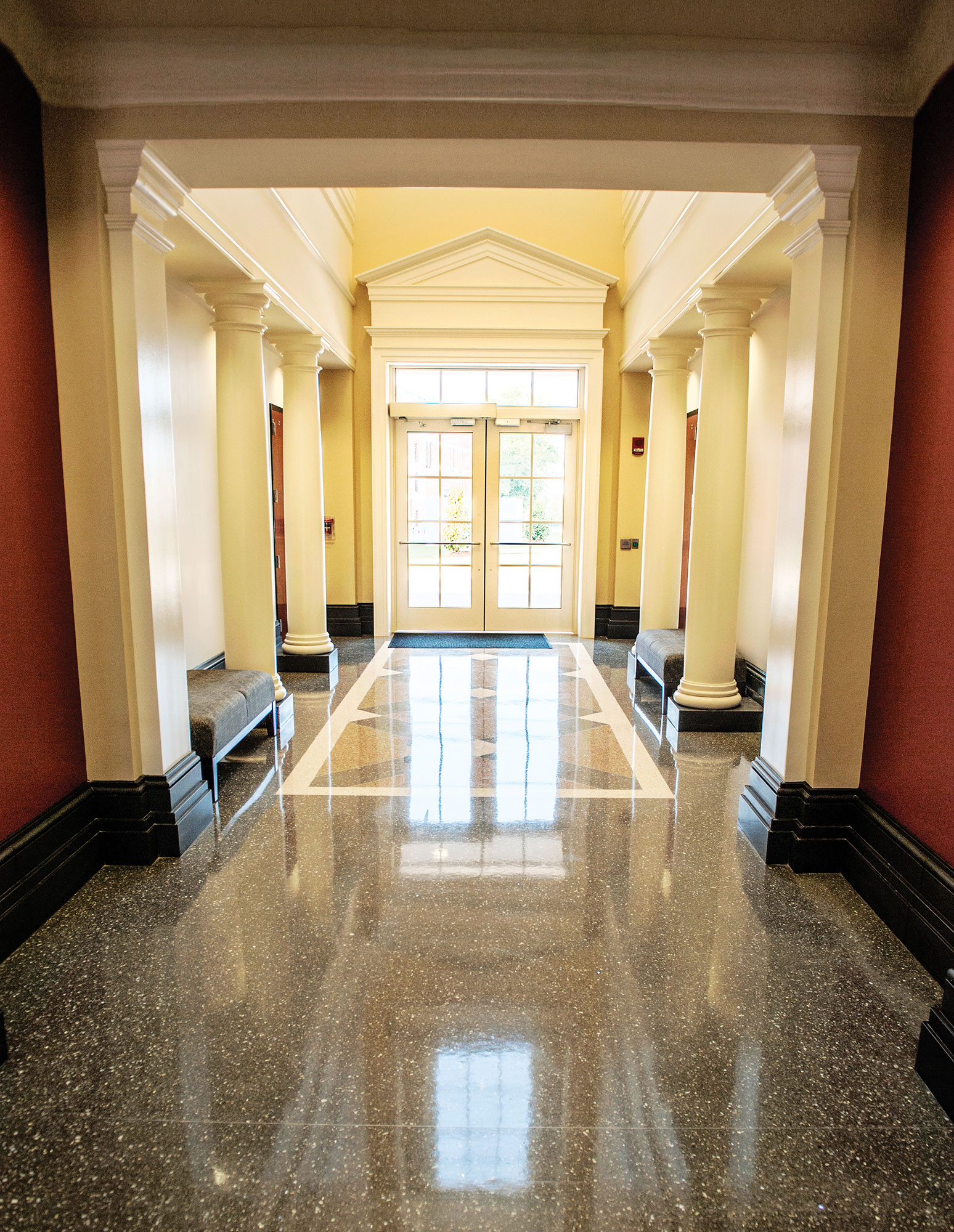 The North Engineering Research Center has a general focus on atomic-level engineering.

Dean Charles Karr, who has been at The University of Alabama College of Engineering as a student, a researcher, professor or an administrator for more than 30 years, likes to tell the anecdote that faculty from two departments once stuck tape on the floor as a line of demarcation between each other’s part of a building.

That sort of thinking is no longer possible in the newest engineering buildings, especially the recently completed North Engineering Research Center. Of the seven departments in the College, only civil, construction and environmental engineering along with computer science do not have a presence in NERC. The professors are mixed together by research thrust, whatever their original engineering background.

“This new arrangement aims to prompt new opportunities for active research faculty to work together,” said Dr. Gregory Thompson, a professor in metallurgical and materials engineering who moved into NERC.

Research and instructional labs have the ability to accommodate new research tools and equipment without major disruptions or heavy costs, an important part of its design and construction.

“In the short time I have been in the building, my group has utilized the various team rooms for scheduled and impromptu multidisciplinary interactions with our peers,” he said. “I can foresee how the modular laboratories will provide my group, and others, the opportunity to adjust equipment layouts to meet current and future research projects.”

Those who moved into NERC focus on research in materials characterization and technology, specifically in structural characterization, composite and nanocomposites, coatings and corrosion, materials processing, welding and joining, as well as electronic, magnetic and photonic devices. The building, designed by Williams Blackstock Architects, of Birmingham, and built by Doster Construction, also of Birmingham, opened in August and is already bustling.

The NERC complements its sister buildings in the Shelby Engineering and Science Quad in its interdisciplinary focus, but, from the outside, it is not as flashy as the other three. It does not have the rotunda like Shelby Hall, the courtyard as in the Science and Engineering Complex or the two grand entrances like the South Engineering Research Center. However, inside is an impressive four-level atrium in the center of the building.

Like SERC, the building is a significant upgrade in research and laboratory teaching space. The four-story building has about 206,000 gross square feet that includes 59 research laboratories, five instructional labs and a 7,000-square-foot clean room that hosts research under strict environmental guidelines.

The instructional labs, like those in SERC, are designed to be flexible so they can handle any of the College’s disciplines each semester. Research and instructional labs have the ability to accommodate new research tools and equipment without major disruptions or heavy costs, an important part of its design and construction.

The faculty is grouped by research thrust much like the arrangement in the other three buildings in the Shelby Quad. Offices are away from research labs and clumped together to encourage interaction and impromptu gatherings among professors. Graduate students no longer live in laboratories away from other students, rather they have open offices near other students to increase interaction.

In NERC, for instance, researchers on materials and nanotechnology from several departments are all situated close to each other. “It’s transformational in how we are arranged now,” said Dr. John Wiest, associate dean for research and graduate studies.

The clean-room, multiuser lab is an example of design that encourages collaboration. Designed by Lord, Aeck and Sargent, as were all the labs in SERC and NERC, the clean room allows users to share equipment and easily assist in each other’s research. Also, offices of power users and meeting space are situated around the clean room to encourage interaction about common research.

The clean room also continues the theme prominent in SERC of putting engineering research on display. Situated near the main entrance, the clean room has windows along the hallway. “The clean room doesn’t need those big windows, but it’s part of the on-display concept,” Wiest said. “We want the community and students to see what we’re doing.”

The clean room’s actual name is the UA Microfabrication Facility, or MFF, and is directed by Dr. Subhadra “Su” Gupta, professor of metallurgical and materials engineering. She works with associate research engineer and clean-room manager, Dr. Alton Highsmith, and a team of graduate and undergraduate students to run the facility. The MFF is managed by the UA Office of Research, and is open to researchers across campus.

The old MFF in H.M. Comer Hall, which had 2,880 square feet, was lost when the back of the building was razed in spring 2011 to make way for the NERC. The research was moved to Bevill. “It’s night and day between the two,” Wiest said. “The last one was put together wherever we could squeeze it into old space.”

With 7,111 square feet, the new MFF is nearly two-and-a-half times larger and broken into three bays.

Clean rooms are classified based on particles present in per volume of air. The International Standards Organization, or ISO, defines the standards. UA has one bay, at about 510 square feet with no more than 100 particles half a micrometer in size, or millionth of a meter, in each cubic foot of space, or 832 micrometer particles per cubic meter. The bay is a Class 100 or ISO 5 clean room.

By contrast, the air in an average room has more than 8.3 million micrometer-sized particles per cubic meter.

This photolithography bay will house equipment that uses light to fabricate a pattern on a substrate. The MFF also houses two bays with 863 square feet of Class 1000 or ISO 6 ratings, with no more than 8,320 micrometer particles per cubic meter in the air. One bay holds etching equipment used in fabrication to precisely remove thin films or drill through silicon wafers, while the other houses deposition equipment to add thin film layers down to less than a nanometer in thickness to a substrate.

The process to move into the clean room is slow going because of a number of factors, but Gupta said the new clean room should allow for better research.

“The equipment can be set up much better than it was previously because of the large service areas adjacent to each of the clean spaces,” she said. “The clean room was designed with a lot of input from us, so it should operate much more smoothly once everything has been set up.”

Users of the MFF conduct research in semiconductor, optoelectronic and magnetic materials and devices. Some examples of the cutting-edge research conducted in the MFF include development of the following:

“I am very excited about how beautiful and functional the new clean room has turned out, and cannot wait to be fully operational in there,” Dr. Su Gupta said. “I certainly hope and trust that the new facility will encourage many more faculty to use the facility, as well as allow us to start marketing our services outside the campus.”