With the opening of the final building, UA ready for a new era of engineering and science 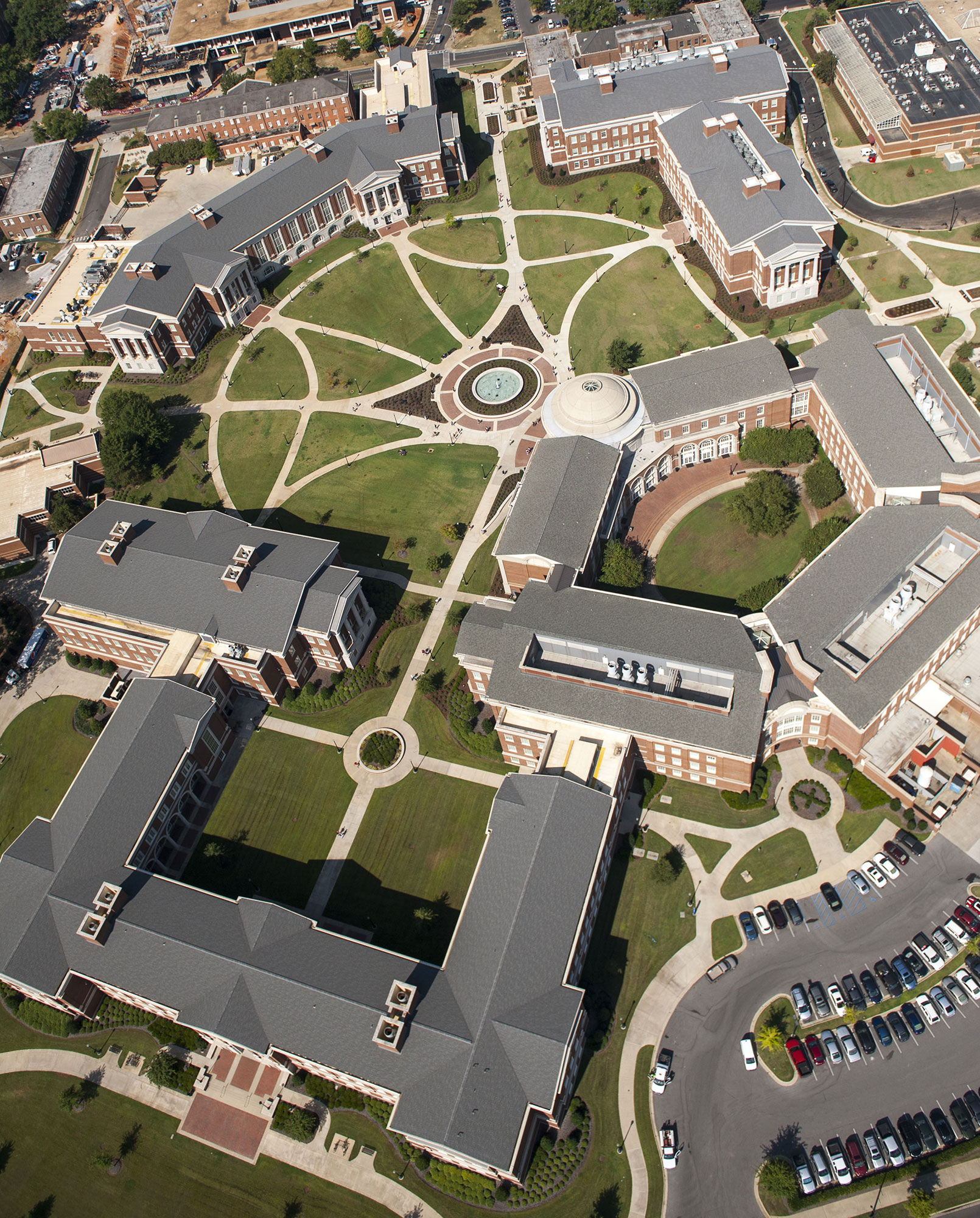 The Shelby Engineering and Science Quad is transforming the University’s ability to teach and research in the sciences and in engineering.

Just 15 years ago, the area between the engineering buildings on The University of Alabama campus and the Bryce Hospital land used to be the back edge of campus — driven through and walked across, but nothing else.

So, when an artist’s rendering of the four-building engineering and science complex was first unveiled nearly 10 years ago, it was difficult to imagine its existence. But in August, the University quietly opened the fourth and final building. A month later, the UA board of trustees officially named the area the Shelby Engineering and Science Quad, turning what was once a vision on paper into a promising reality.

“I could never have imagined a complex such as this,” said Sen. Richard Shelby, the U.S. statesman from Tuscaloosa who helped secure federal grants to pay for the lion’s share of the construction costs.

“It’s beautiful,” he said standing in the middle of the buildings with his wife, Dr. Annette Shelby, for a photo. “This is such an asset for this University and our state, but it’s not what it looks like that matters. It’s what comes out of it, and that’s students.”

“You simply have to have outstanding facilities to be competitive today.”Dr. Charles L. Karr, dean

The Shelby Quad consists of four buildings. The first, Shelby Hall, opened in 2004. The last, North Engineering Research Center, opened this past August, completing a transformation in the University’s ability to teach and research in the sciences and in engineering.

“A decade ago, we had a vision for world-class facilities in engineering and science at The University of Alabama,” said Dr. Judy Bonner, UA president. “Sen. Shelby, our congressional delegation and our board of trustees embraced that vision and now, with the completion of the Shelby Engineering and Science Quad, that vision is reality.

“With nearly a million square feet of world-class engineering and science space, these facilities have transformed the ways we teach and conduct research. The research that takes place in these labs, equipped with the latest technology, will have a significant economic impact on the state, as will the success of the students who have the opportunity to study here.”

For Dr. Charles Karr, dean of the College of Engineering, the facilities are the jewel of campus, and he shows them off to whoever can come to campus, especially high school students considering an education at UA.

“You simply have to have outstanding facilities to be competitive today, and this is especially true in recruiting,” Karr said. “In some ways, recruiting in engineering is just as it is in athletics. It is almost an arms race. We needed these wonderful new facilities to ramp up our recruiting.”

And with state-of-the-art labs throughout the buildings, they also help attract faculty and graduate students, he said.

Each building has a general theme. In Shelby Hall research is devoted to molecular-level chemistry. The adjoining SEC concentrates on biological research. Chemical engineering has labs and research in both. In the SERC, the focus is on engineered systems, such as structures and mechanical and electrical systems. The NERC has a general focus of atomic-level engineering.

These are broad themes. A lot of space in each building is devoted to other things. Computer science research, for instance, has a large presence in Shelby Hall and the SEC. “There was a grand scheme,” said Dr. John Wiest, associate dean of research and graduate studies, who was the College’s representative during the planning and construction process. “It was really based on the types of labs we needed.”

During planning, campus leaders were not assured the next building would come, Karr said.

“We had a large vision for the complex, but we wanted to be sure that should we have to stop at any point, that we would be in a workable configuration,” he said. “The complex is remarkably close to what we put forth as a vision to begin with.”

With the completion of NERC, about three-fourths of the College’s faculty is in new labs within the Shelby Quad. Researchers in the environmental group have labs in the Bevill Building, and major nanotechnology equipment such as an electron microscope also remains in Bevill. Fluids research and much of aerospace engineering faculty are still in Hardaway Hall.