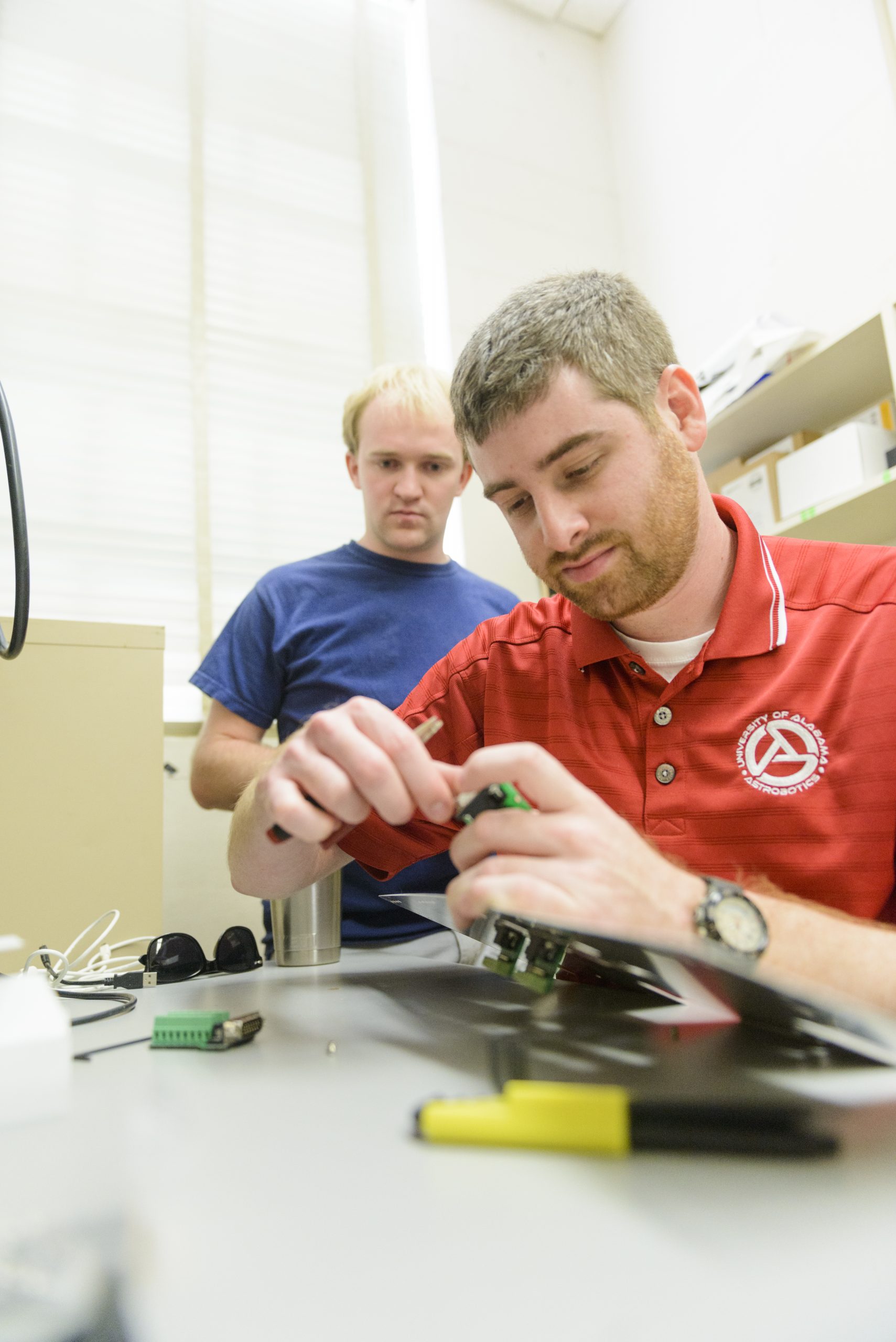 There’s a team of students at The University of Alabama who have won multiple national titles in recent years and perform at a high level. This team doesn’t play football, though. It creates and competes with robots.

Alabama Astrobotics won its third national title at a NASA robotics contest in 2016, the second championship in a row. In fact, in the contest’s seven years, the team from the University is the only team to win it more than once.

“Our successes are the result of having talented, dedicated students who recognize the value of hard work and who are not afraid to put in the hours necessary to be successful,” said Dr. Kenneth Ricks, UA associate professor of electrical and computer engineering and team adviser. “Our students understand the commitment required, and they have demonstrated they are willing to do the work.”

Made up of students from across engineering disciplines, computer science and other areas of campus, along with students from Shelton State Community College, Alabama Astrobotics bested student teams from 45 other institutions in the challenge to build a robot capable of navigating and excavating simulated Martian soil at the 2016 NASA Robotic Mining Competition at Kennedy Space Center.

Robots are judged not only on how much simulated soil they can dig and deposit into bins but also on their ability to operate on their own, or autonomously. The robots are also judged on size and weight, and Alabama Astrobotics built a robot that performed well in all three areas. The team placed first in the categories of mining, autonomy and technical presentation.

“Every year the level of competition improves across the board,” Ricks said. “What separated the UA robot from the others is that it performed well in all three areas: digging and collecting; robot mass; and autonomy. That combination was unequaled by the competition.”

Even with the success in the mining competition, the team was not finished with NASA contests. The team turned its attention to a different NASA challenge, the Sample Return Robot Challenge. Both contests required the students to build robots capable of collecting samples from the ground. Team members said the overlap between the contests improved both robots they built over the past year.

“There were members of the team who wanted a new problem to solve, so tackling Sample Return has given us that opportunity,” said Caleb Leslie, a graduate student in electrical and computer engineering who served as team lead for Alabama Astrobotics at the time.

In the mining contest, robots can be controlled by human operators, although UA’s team was the only one to complete the challenge with a self-guided robot. In Sample Return, robots are required to operate on their own to locate and retrieve specific sample types from locations over a wide and varied terrain and return those samples to a designated zone within two hours with limited mapping data.

Leslie said the contest takes place over an area roughly the size of UA’s Quad, and the samples the robots have to collect range from colored rocks to metallic objects.

“It’s just an entirely different problem,” he said. “You learn little pieces between each one that contribute to the other, but the biggest carry over are some of our localization algorithms and the way we can see our environment and move around.”

The contest is divided into two levels. In June 2016, Alabama Astrobotics became the first team in the five-year history of the challenge to successfully advance to Level 2 on its first try. The team’s robot also completed the challenge the fastest, clocking in at 6 minutes and 15 seconds.

Only five of the 18 teams, comprised of citizen inventors, university teams, families and small businesses, who competed in the challenge last year advanced to the final round. Only seven teams ever made it to Level 2 in the contest’s history, including the UA students.

The team did not win the contest, but Joe Kabalin, a senior in mechanical engineering from Cincinnati, Ohio, and team lead for Alabama Astrobotics this year, said the lessons provided were invaluable.

“We are learning every day how to do new things,” Kabalin said. “We take what we learn in class and apply it in a practical way.”