Parked in Alabama, yet Accelerating 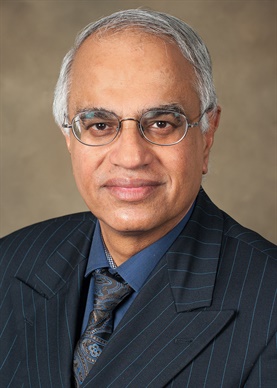 Dr. Bharat Balasubramanian likes to talk about his car. He’ll show it to you if you’ve got just a moment. It’s a Mercedes-Benz S-Class. Of course, most anyone would be proud to have the wherewithal to buy the premium luxury vehicle, but he’s not bragging about his new toy.

Rather, Balasubramanian is showing off his work.

After all, he and his team at Mercedes designed the car. Its innovations such as semi-autonomous driving are ones he percolated as vice president of group research and advanced engineering for Daimler AG, responsible for product innovations and process technologies.

Widely respected in the automotive and computer software industries, Balasubramanian’s work will help usher autonomous driving features into consumer cars later this year, and advanced research he guided will continue to influence automotive technology. Now, he and his S-Class are parked at The University of Alabama.

After nearly 40 years as a research and development engineer for the Mercedes-Benz brand in Stuttgart, Germany, he retired from Daimler in 2012. Turning down high-profile opportunities in industry, Balasubramanian is now a member of the faculty in the College of Engineering.

But his appointment isn’t a plush position of an occasional lecturer with odd office hours who can grow a scruffy beard and get away with tweed jackets and argyle sweaters. He’s not riding off into the sunset in Tuscaloosa. Balasubramanian is charged with breathing new ideas into the curriculum and improving upon automotive research to train students and attract new industries to Alabama.

“We are very excited to have Dr. Balasubramanian join the College of Engineering at The University of Alabama,” said Dr. Charles L. Karr, dean of UA engineering. “His extensive experience in automotive research and development will be of great benefit to both the University and the state of Alabama.

“He has been at the forefront of most of the major advances that have occurred in automotive technology over the past 20 years, and we are looking forward to having him work with our faculty and students on cutting-edge automotive research and on ensuring our graduates are prepared to address the automotive challenges the world will face over the next 20 years.”

“I want to help make The University of Alabama into one of the best institutions in the U.S. for engineering.”
—Dr. Bharat Balasubramanian

His journey from Germany to UA began in 2011. That November, Balasubramanian gave a lecture on campus about the tradition of innovation at Mercedes-Benz, especially in the area of safety. He said he was impressed with the College’s effort to organize research projects in laboratories used by faculty across the College, regardless of engineering focus.

Early in 2012, the College opened the South Engineering Research Center that boasts premier facilities, including the Engines and Combustion Lab and the Electromechanical System Lab, both of which rely on mechanical, electrical and computer engineers to tackle industry sought research that also trains students to answer tomorrow’s engineering challenges.

“It’s very seldom that you see a university where different departments collaborate in the same lab, similar to what is happening in industry,” he said. “I was very impressed with how much effort The University of Alabama was putting into reorganizing research around these collaborations.”

Approaching mandatory retirement, Balasubramanian said he was encouraged by friends at MBUSI to consider coming to Tuscaloosa to teach and research, an opportunity he pursued.

“I want to help make The University of Alabama into one of the best institutions in the U.S. for engineering,” he said.

Before his lecture on campus in 2011, Balasubramanian encouraged a new partnership between UA and Daimler’s Mercedes-Benz U.S. International Inc., the operator of the Mercedes-Benz automotive plant outside Tuscaloosa, which established a doctoral fellowship. The fellow is assigned a specific project and given research funding with the opportunity to work at the plant and research facilities in Germany.

The fellowship between UA and MBUSI is like the experience of Balasubramanian, who began working with Daimler while studying for the equivalent of a master’s degree at the Technical University of Karlsruhe in Germany.

A native of India, Balasubramanian was interested in transportation from a very young age, and knew since the age of 15, after reading of innovations and quality at Mercedes-Benz, that he wanted to be a researcher for Daimler. That dream became reality after he graduated from the Indian Institute of Technology in Bombay in 1973.

Mercedes hired him full time as a computational analysis engineer in the CAE department for automatic transmissions and power steering systems after he got his master’s in mechanical engineering in 1977. He earned his doctorate from Karlsruhe in 1983 while working at Daimler.

There is no such staff at UA. He has a standard faculty office off a third-floor hallway in SE RC. After 40 years of working for a behemoth German corporation, Balasubramanian thought academic work in the United States might be a bit more laid back. He’s pleasantly surprised it is not.

“One would think university life is totally relaxed, but it isn’t,” he said. “I’ve been impressed.”

He began in October as a professor in both the mechanical engineering and electrical and computer engineering departments and as executive director of the Center for Advanced Vehicle Technologies, or CAVT, a cross-discipline research center focused on automotive innovation.

Balasubramanian said he wants to strengthen relationships with industry so research and development benefit both, and he hopes to use his experience at Daimler to prepare students to work for the auto industry in Alabama and the Southeast.

“Nearly every foreign automotive company has a presence in the Southeast,” he said. “We not only want to make students better prepared to work for them, but that they are so well trained those companies won’t look at other universities before they look at The University of Alabama.”

He is developing two courses. One is an automotive engineering course called “Fundamentals of Automotive Systems” for upperclassmen that teaches a basic engineering understanding of the systems in a modern automobile and how they interact. The second is a more advanced course for graduate students that teaches finite element statics and dynamics that will be applied to cars with fundamentals useful for all engineering disciplines.

The courses will build from those he taught regularly the last 20 years at the Technical University of Berlin in the School of Automotive Engineering and Railway Technology, where he was given the prestigious title of honorary professor in 1998.

With CAVT, Balasubramanian hopes it will be a feather in the state’s cap when recruiting industries to Alabama by being a hub of automotive engineering that research companies can use to scale up their production. Along the way, the CAVT will continue its mission of prepping students to work in industry and academic research.

“They have been doing good work,” he said. “We will need to find areas where the interdisciplinary nature of the center is leveraged to align research to what is required by industry.”

He is in talks with Alabama government leaders and other state universities on ways to focus limited state money on beefing up automotive research. “It will be a challenge,” Balasubramanian said. “I am building enthusiasm.”