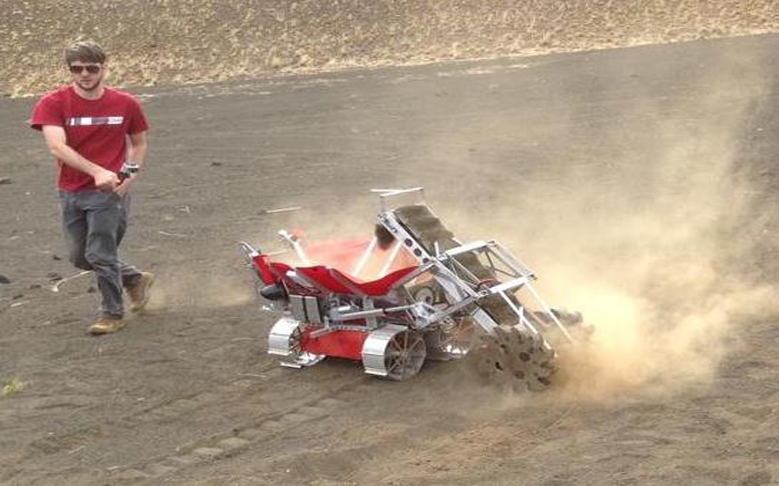 In 2012, after winning the NASA robotic mining contest, several students from The University of Alabama College of Engineering traveled to PISCES for a demonstration. Here, the robot digs in the analogue test site at PISCES in 2012.

Tuscaloosa, Alabama – A team of University of Alabama students who won the top prize at a NASA contest this year are traveling to Hawaii for another contest.

Made up of engineering and computer science students from The University of Alabama and Shelton State Community College, Alabama Astrobotics earned the most points in May during NASA’s Robotic Mining Competition at Kennedy Space Center, which challenges collegiate engineering and computer-science students to build a robot capable of navigating and excavating simulated Martian soil.

From July 21-25, Alabama Astrobotics will be a part of PRISM, PISCES Robotic International Space Mining, an event that evolved from the annual NASA Robotic Mining Competition. The team will compete against other collegiate robotic mining teams at the Pacific International Space Center for Exploration Systems, or PISCES, a Hawaii State Government Aerospace Agency located in Hilo, Hawaii.

PISCES has participated in NASA’s contest as an invited judge in past years and is now taking the competition to the next level by way of PRISM, which is open to all college teams world-wide.

This year is the first year of PRISM, which will host the top five winners of NASA’s contest. They will take their proven designs and place their robotic mining machines in the more realistic and rugged environment of PISCES’ NASA-proven high-fidelity Mars and Lunar Analogue Test Site.

Dr. Kenneth Ricks, associate professor of electrical and computer engineering and the team’s faculty adviser, said seven members of Alabama Astrobotics will be at PRISM.

This is not the first time the UA team has been to PICSES. In 2012, several members of the team along with Ricks too the robot for a demonstration and testing after winning the NASA contest that year.