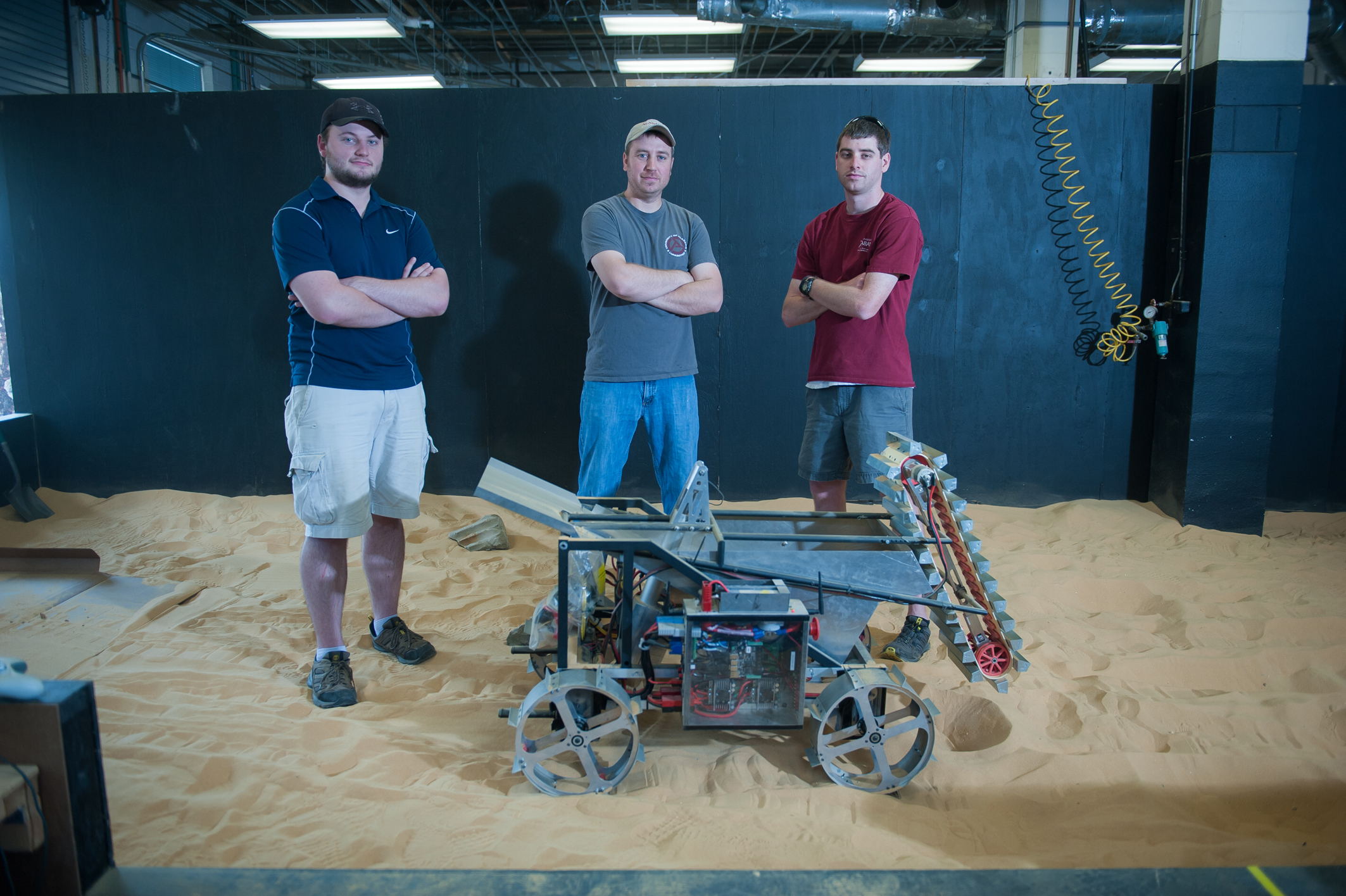 Team members, from left, Jake Webster, Michael Carswell and Caleb Leslie with the astrobot in a sand pit located in space devoted to student projects in Hardaway Hall.

When humans begin to explore other planets, such as Mars, or return to the moon, their trusty robots will have to be more than remote-controlled hunks of metal. Much like NASA rovers that have explored the Martian surface, robots will have to think for themselves, at least in some aspect.

“Autonomy is a big deal for NASA because astronauts can’t be expected to perform repetitive tasks for long hours,” said Dr. Kenneth Ricks, associate professor of electrical and computer engineering. “Just like jobs on earth, NASA wants as much autonomy as possible to allow humans to perform higher-level tasks.”

Ricks is the adviser to Alabama Astrobotics, a team of students from The University of Alabama College Engineering and Shelton State Community College who compete in the NASA Robotic Mining Competition, which challenges collegiate engineering and computer science students to build a robot capable of navigating and excavating simulated Martian soil.

During the competition held in May in Florida, the team’s robot completed the first and only intelligent, fully autonomous run in the contest’s history, Ricks said.

“Being the first team to complete this autonomous milestone was quite rewarding for a team that has sacrificed countless hours in the lab designing, building, testing, debugging and developing this robot,” said team leader Caleb Leslie, a graduate student in computer engineering and mathematics from Enterprise, Alabama. “Autonomous operation is something we like to hang our hat on.”

As part of the competition, students build robots designed to excavate simulated Martian regolith, or a layer of loose material that covers a solid rock. The robot is allowed two windows of 10 minutes to move through obstacles across a small arena and excavate as much regolith as possible.

This year, the team focused primarily on building a completely autonomous robot that could navigate the arena by itself. To accomplish this, the team implemented onboard intelligence.

“While it is instinctive for humans to see a rock as they walk and avoid it, the robot can only do those things through sensors and lots of software algorithms that interpret sensor data and translate the data into drive commands,” Ricks said.

“Being the first team to complete this autonomous milestone was quite rewarding for a team that has sacrificed countless hours in the lab designing, building, testing, debugging and developing this robot,” Caleb Leslie, team leader

The UA robot is equipped with a laser scanner and inertial measurement unit, or IMU, to scan and track the robot’s position and orientation. The path-planning algorithm uses that information to drive the robot. While digging, the robot uses a load cell to measure how much dirt it has collected. When the threshold is met, the robot stops digging and returns to dump the dirt.

“All the onboard sensors allow the UA robot to sense its environment and make real-time decisions about what to do next,” Ricks said. “Nothing is predetermined, which is what separates the UA robot from the others trying autonomy.

“The other approaches are much simpler and less realistic measures such as using the arena walls as bumpers or ignoring obstacles and hoping they don’t hit anything,” Ricks said. “While these approaches are within the rules, they do not translate to the real world.”

Along with Ricks, Renea Randle, mathematics instructor at Shelton State Community College, served as an adviser for the team.