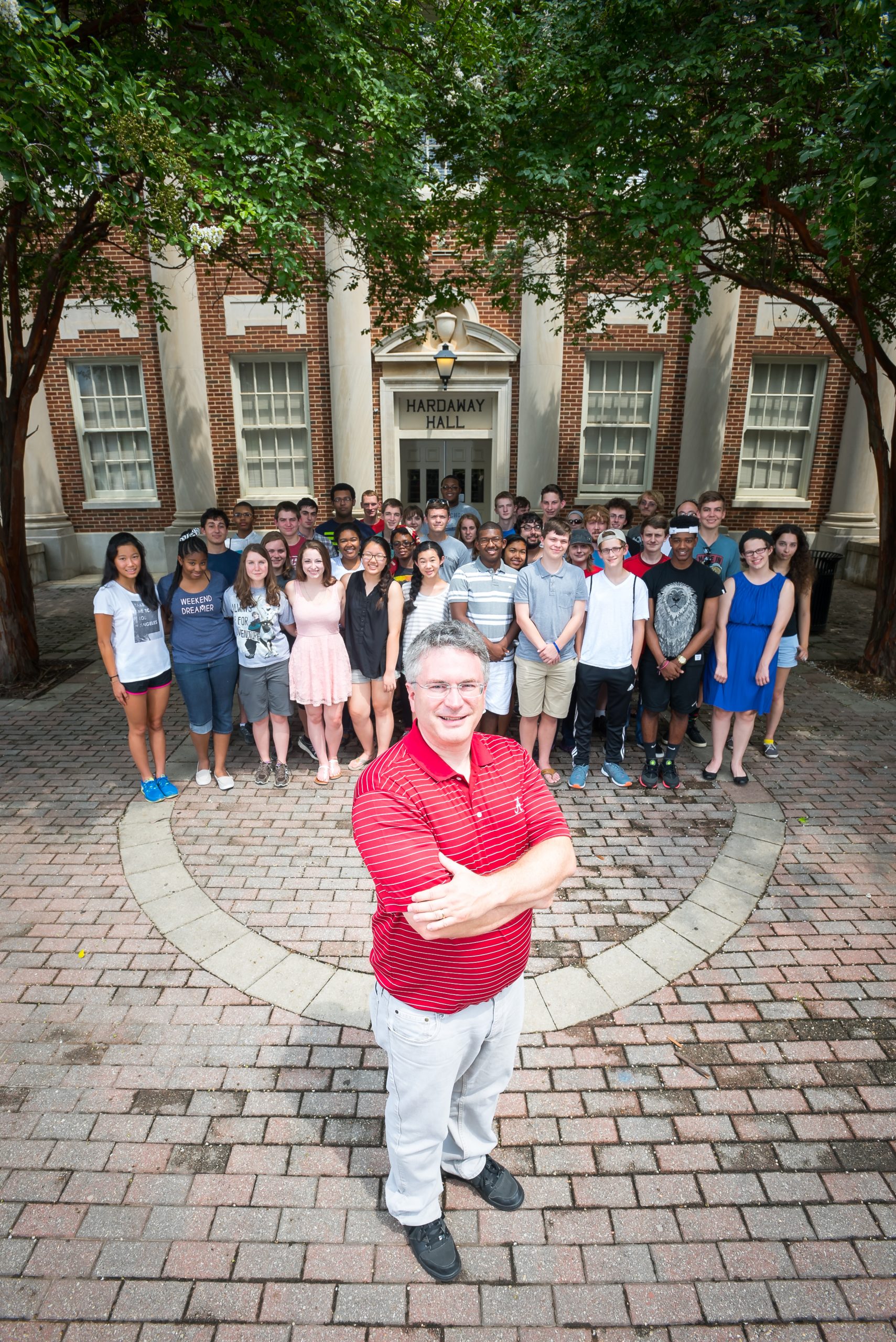 Dr. Jeff Gray with students from one of his summer camps.

For Dr. Jeff Gray the logic is simple: If jobs in computer science are in high demand, yet difficult to fill because not enough students learn the discipline, then much more needs to be done to get additional students interested in computer science as early as possible in the education pipeline.

“Software is everywhere, and computing has the potential to positively impact all sciences and engineering areas, as well as many areas of daily life,” Gray said. “Computer science as a foundational core is as important to learn now as any physical or life science, yet computer science is not taught in the overwhelming majority of schools.”

The manifestation of that logic has led Gray, a professor of computer science in the UA College of Engineering, to become a national leader in computer science education, recognized around the country for his work.

This past year he was recognized as one of three national Distinguished Educators by the Association for Computing Machinery, the first from the state of Alabama to receive the designation. He is also a member of the 10-person Education Advisory Panel for Code.org, an influential advocacy group for computer science education.

He has worked with partners across the country and Alabama to develop new computer science courses and instruction, and leads contests and camps to spur interest with students. He does this service while maintaining his teaching and research in the department of computer science. In addition to his K–12 education efforts, he also mentors seven doctoral students and leads three active National Science Foundation research projects.

“I often feel like I am wearing two different hats.” he said.

“Computer science as a foundational core is as important to learn now as any physical or life science, yet computer science is not taught in the overwhelming majority of schools.”

In 2007, Gray received the prestigious National Science Foundation CAREER award. The following year, he was named the Alabama Professor of the Year by the Carnegie Foundation.

For Gray, teaching computer science or incorporating computational concepts into a curriculum at all levels makes sense. Software and automation are only going to be more etched into every industry, and students need exposure to coding and programming languages — what they do, how they work and why they are useful. Gray said that computer science in high school needs to go beyond teaching students to be just users of technology, such as learning how to use Microsoft Office, but rather developers of new technology.

Gray has worked with the College Board and the National Science Foundation since 2011 on piloting a new advanced placement computer science course, called CS Principles, while also working to train high school teachers in Alabama and across the United States to teach the course.

The College Board administers exams and oversees curriculum for high school courses that can count toward college credit, commonly called AP classes. The College Board has been developing the new CS Principles as another option to the current AP computer science course, which is heavily focused on learning the computer programming language Java.

“The current AP course is deep, but you typically don’t learn a lot about computer science at a broader level,” Gray said. “You just learn how to program in Java.”

CS Principles introduces students to a broad range of computer science topics, from how algorithms and the Internet work to how technology is constantly changing the world. “The new course is broader, so students learn a lot more topics in a way that is creative and impactful,” he said.

As part of the program, Gray started teaching CS Principles at UA. The College Board requires universities to offer college credit for corresponding courses to make the new course and exam successful.

The hope is that the new course will entice more students from different backgrounds into a computer science classroom. About 15 percent of students who sit for the current AP computer science exam are women or underrepresented minorities, Gray said.

“We’re trying to get more diversity by getting more people in the pipeline,” he said. “If we don’t build the pipeline in kindergarten, fifth grade and all the way up, we’re never going to have the desired diversity in the workforce.”

Though the AP exam won’t be administered till the 2016-17 academic year, already some 500 schools across the nation offer the course. Among the 50 high schools that are starting to teach the new course, about 47 percent of the students are young women or underrepresented minorities. “That’s unheard of in computer science,” Gray said.

At UA, Gray also teaches a version of the CS Principles course that is nearly 70 percent women.

With funding from NSF and working with a statewide education group, A+ College Ready, Gray has helped train about 50 teachers the past three years across the state to teach CS Principles, which is already offered in some schools. He has led year-round professional development activities for the group. The teachers have, in turn, trained others.

In Alabama, about four teachers taught the current AP computer science course in 2007. Now, 50 teachers are trained and offering the new CS Principles course across classrooms in Alabama. Over the 2015–16 school year, more than 1,200 Alabama students will enroll in the CS Principles course.

“When CS Principles hits, Alabama is going to have numbers that shock people,” he said. “We’ll pass states that are way ahead of us now with students taking the exam.”

In 2014, Google paid for Gray to scale up his training into what’s called a massive open online course, or MOOC. That year, about 1,200 teachers across the country were trained to teach CS Principles. He continued to offer the course again in the summer of 2015 with teachers from 47 different states and 14 countries participating.

In fact, Google sponsored programs in five other states — California, Georgia, Iowa, Indiana and Texas — that used Gray’s MOOC as an online foundation. Teachers meet with specialists in their home states for a weeklong, face-to-face meeting that provides additional instruction.

“This is the only realistic way to do this type of training when the teachers are geographically dispersed,” Gray said. “The financial cost, and the extensive commitment by teachers to be away from their family, makes an extended, face-to-face training unfeasible.”

In another effort, Gray and colleagues at Duke and Rutgers universities just started a new NSF project focused on teaching methods that help to make computer science more engaging to students. Their first workshop in Dallas, Texas, this past summer showed teachers from across the U.S. how to use cooperative learning strategies to give everyone in the classroom a voice as a participant.

Working with Code.org this past year, Gray traveled across the state to lead training workshops for about 550 elementary-level teachers, hoping to get them to incorporate ideas from computer science into their curriculum. Workshops were added to the schedule as word got out.

“I could quit my job right now and do nothing but teach elementary schools across the state because the demand is so high,” Gray said. “Those teachers are really excited about it.”

“I get a kick out of seeing a kid who’s not sure what they want to do in life, and then seeing them react with excitement about the new potential they have to creatively explore new opportunities through computing.”

Unlike his advocacy in high schools where he works to get an entire course offered, Gray said teachers in the elementary schools can give about 20 hours for coding or computer science instruction in a year, perhaps more for gifted classes. The more done in the primary and secondary grades, the less that could be needed at the university level, he said.

“The same thing I’m teaching my freshmen class — loops and if statements — we’re now teaching in fifth grade,” Gray said. “You have to learn it somewhere, so we can either teach it here or it could be done in K-5.”

Besides training teachers, Gray also works directly with students. For the past five years, he and his team at UA have hosted the Alabama Robotics Contest. In its first year, about 25 students competed. This past year, close to 400 students from school teams across the state came to campus, with an additional 300 parents and teachers.

Unlike at other robotics competitions, students are not judged on building the robot but on how the robot performs in obstacle courses. Students program the robots at a computer before watching the robots autonomously carry out their instructions on the playing field.

“It’s a programming contest within the context of a robotics competition,” Gray said. “We take a fun context and make it exciting for the students, but they are still learning the fundamentals.”

He also hosts summer camps for high school students, who apply from across the U.S. Students are taught multiple topics of computer science while learning to program a computer in several exciting contexts such as video games, robotics and smartphone apps. The 2015 camps had students from 13 states coming to Tuscaloosa to attend the camps.

Gray is a mentor, too, to four or five high school students a year, prepping them for the International Science Fair. He sees that as an extension of the research mentoring he does with UA undergraduates through the Emerging Scholars program and his graduate students.

“The original motivation was having mentors in my life and trying to be that for others,” Gray said. “I get a kick out of seeing a kid who’s not sure what they want to do in life, and then seeing them react with excitement about the new potential they have to creatively explore new opportunities through computing.”