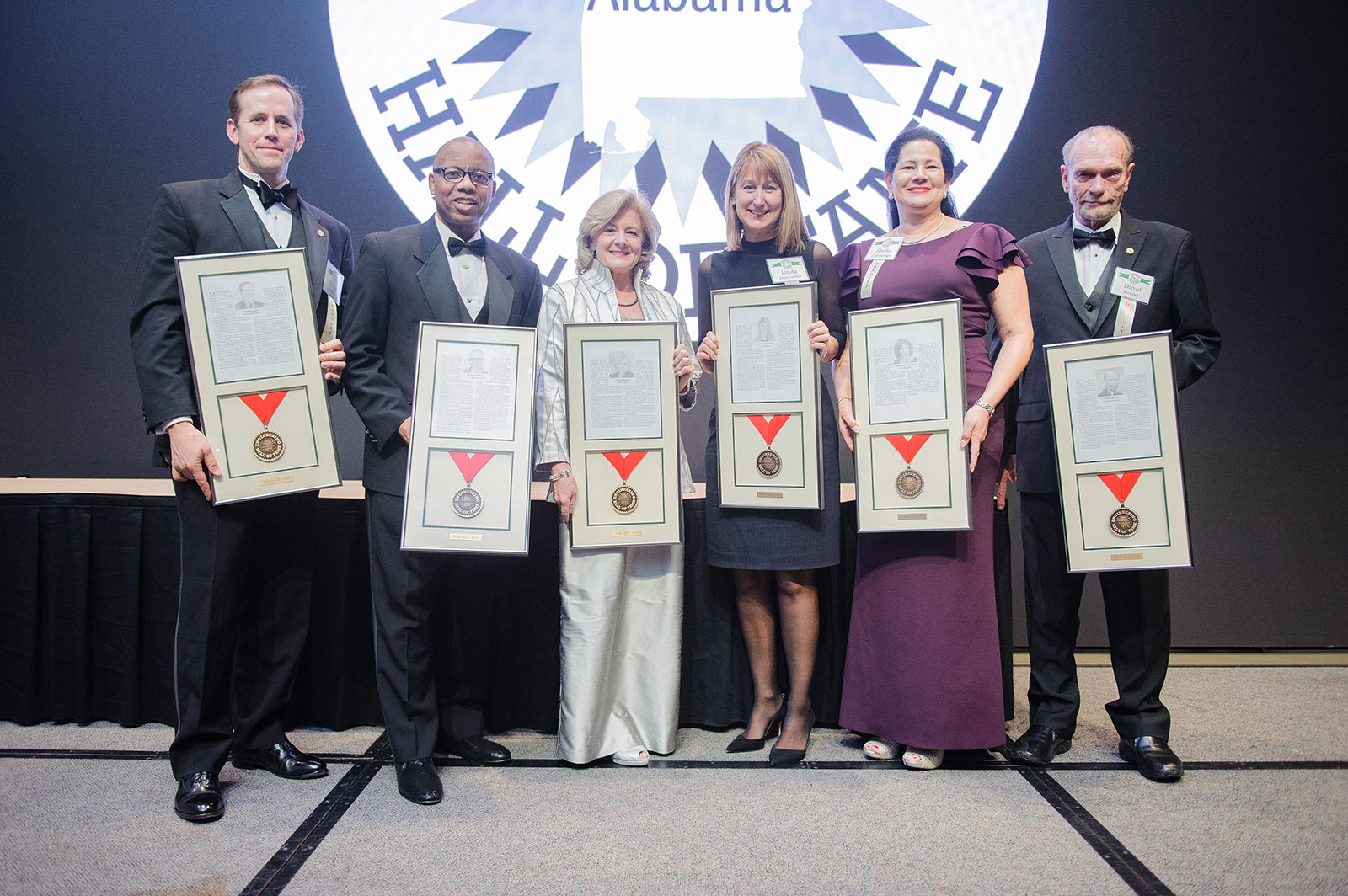 TUSCALOOSA, Ala. — The State of Alabama Engineering Hall of Fame inducted six new members during a recent ceremony at the Bryant Conference Center in Tuscaloosa.

These six individuals joined the 192 inducted into the Hall of Fame over the past 32 years: Sheila Cummings, Linda Ducharme, Michael Johns, Kenneth Kelly, David Mobley and Jody Singer.

Founded by proclamation of the governor, the state of Alabama Engineering Hall of Fame honors, preserves and perpetuates the outstanding accomplishments and contributions of individuals, projects and corporations/institutions that brought and continue to bring significant recognition to the state.

It is administratively managed through the UA College of Engineering. For more information, visit aehof.eng.ua.edu.

As director of NASA’s Marshall Space Flight Center in Huntsville, Singer manages nearly 6,000 civil service and contractor employees either on site or nearby and steers a $2.8 billion budget. In her role, she is a critical part of returning NASA astronauts and scientists to the Moon and beyond on American-made rockets and spaceflight vehicles.

She grew up in Hartselle, Alabama, and graduated from The University of Alabama with a bachelor’s degree in industrial engineering in 1983. She began her career with NASA in 1985 through the professional intern program in the mission planning and development office.

In 2002, she was appointed to the Senior Executive Service, the personnel system covering top managerial positions in federal agencies. Her honors include NASA Outstanding Leadership Medals and two Presidential Rank of Meritorious Executive Awards, the highest honor for career federal employees. She was also awarded the Silver Snoopy Award by the NASA astronaut corps.

Through his work at Southern Research Institute as vice president of the engineering division, Johns has grown annual revenue to more than $25 million in research volume for a division that employs more than 100 engineers, scientists and support staff. He has directed and managed high-profile research and commercial projects and has been a strong advocate for the key technologies the country needs to develop.

He graduated from The University of Alabama in 1997 with a bachelor’s degree in mechanical engineering and would later earn his MBA from UA in 2005. He began his career with Southern Research as a cooperative education student, joining it full time as a materials engineer after graduation.

He is an active member of the UA College of Engineering Dean’s Leadership Board, the UA mechanical engineering advisory board and the UA STEM Path to the MBA board.

Cummings is the founder, president and CEO of Cummings aerospace Inc., a Native American woman-owned small business in Huntsville. Since its inception in 2009, she has led all aspects of corporate operations and strategic development for the company as it has positioned itself to be an industry-recognized leader of aerospace engineering solutions and technologies for aerospace system development.

In 1995, Cummings graduated with a bachelor’s degree in aerospace engineering from the University of Maryland. Her service to her profession includes membership on the board of directors for the National Defense Industrial Association, the advisory board for The University of Alabama Department of Aerospace Engineering and Mechanics and the UA College of Engineering Dean’s Leadership Board.

Kelly serves as chairman and CEO of First Independence Bank Detroit, Michigan, after a successful 27 years at Southern Company. A native of Eufaula, he graduated from Auburn University with a bachelor’s degree in electrical engineering. He would later earn his executive MBA from The University of Alabama.

Kelly served as a loaned-executive from Alabama Power to The University of Alabama for two years as the associate director of the Alabama Productivity Center, which was located in the Culverhouse School of Business in Bidgood Hall. During his tenure, the center worked on real-world applied research projects with Mercedes Benz, U.S. Pipe, ACIPCO, Bruno’s and many others.

Kelly now leads the seventh largest African-American controlled commercial bank in the country. He is responsible for leading the bank’s financial operations, assets, policies and regulations, in addition to overseeing the company’s management infrastructure.

DuCharme joined Exxon Company USA in 1986 after graduating from Auburn University with a bachelor’s degree in chemical engineering. She was named president of ExxonMobil Upstream Integrated Solutions Company in April 2019 as part of a restructuring of ExxonMobil’s seven upstream companies to three.

In this role, she is responsible for setting the vision and direction of the engineering, geoscience, research and commercial centers that execute drilling operations, develop and deploy technology, provide expertise in subsurface and surface engineering, and drive commercial and trading performance. DuCharme is also responsible for skill development and deployment across the upstream, ensuring the best talent is in place to innovate, integrate, and develop transformative solutions for upstream success. As such, DuCharme serves as the executive sponsor of staffing and long-term development for global organization of over 15,000 employees, where she is a champion for inclusion and diversity.

Among his lasting career achievements were brokering a peaceful and technically awe-inspiring collaboration to birth the International Space Station, one of the greatest engineering feats in human history. His efforts led him to become NASA’s chief engineer before retiring from federal service after 35 years. He remains active as a consultant and expert for NASA and its contractors.

Mobley graduated from Auburn University in 1961 with a bachelor’s degree in electrical engineering and joined NASA as a test engineer working on Saturn rockets. During his career with the space agency, he worked at Marshall Space Flight Center, Kennedy Space Center, Johnson Space Center and at the Thiokol plant facility in Utah.

He retired from NASA in 1996 and became chief engineer for Boeing Space and Defense Group in Huntsville before being assigned as the UA Lab/Hab lead.

He has numerous awards: NASA’s Silver Snoopy Award in 1988, the NASA Medal for Outstanding Leadership in 1993 and two NASA Medal’s for Exceptional Service.